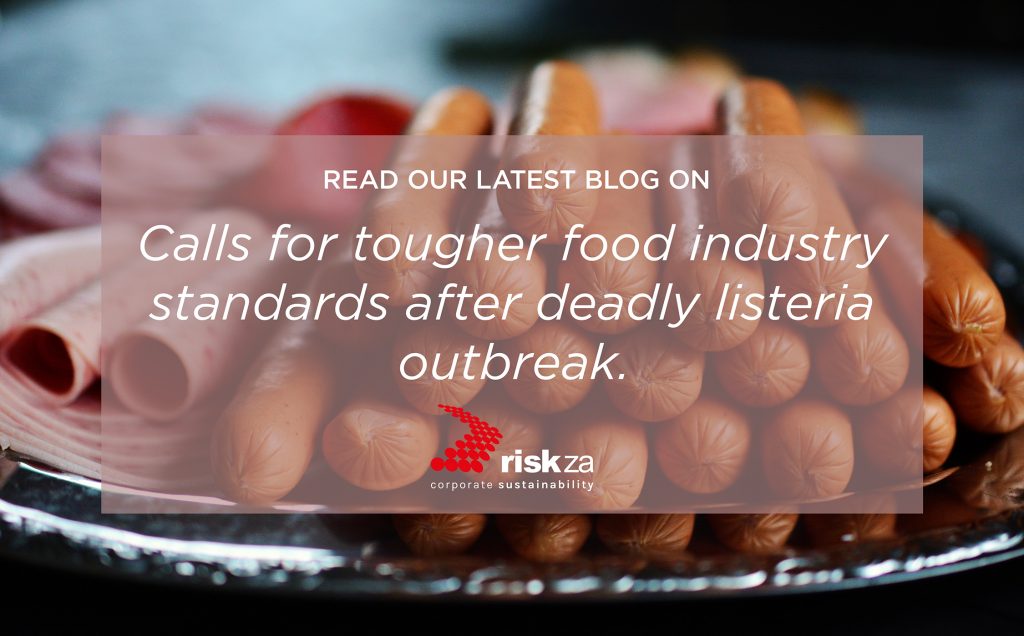 Tiger Brands’ CEO Lawrence MacDougall announced in a press statement shortly after  Enterprise Polony was withdrawn from supermarket shelves, that tougher food safety standards are needed not only in South Africa but worldwide.

Food product recalls are at an all time high, which may or may not be good news.

Improvements in pathogen and risk detection technology and better regulatory oversight go some way to explaining the increase in recalls. But in the United States, undeclared allergens in foods topped the list as the major reason for food recalls.

The U.S. Agriculture Department has placed fresh produce, meat, poultry, and seafood on its ‘watch list’, as these foods pose the greatest potential health risk and are the cause of most foodborne illnesses, hospitalisations, and deaths.

Six people in Europe died in March from eating frozen corn contaminated with Listeria monocytogenes, and consumers were warned to avoid eating romaine lettuce after an E.coli outbreak in 13 U.S.states and Canada was traced to Canadian grown lettuce.

The World Health Organisation (WHO) announced in April 2018 that the world’s worst Listeria outbreak was showing a downward trend in South Africa but it expected more cases.

A total of 1,024 cases and 200 deaths from all provinces across the country were reported by the National Department of Communicable Diseases in May 2018.

But the death toll could be much higher as importers of Enterprise and RCL Foods products in the Southern African Development Community (SADC) region‚ do not have the testing and monitoring facilities to detect listeriosis cases.

The WHO believes that the number of people infected could indicate more than one source of the outbreak.

Listeria outbreak is a disaster for the entire ready-to-eat meat industry.

At the peak of the Listeriosis outbreak 80 tons of recalled polony were being destroyed daily.

Enterprise shut down its Polokwane and Germiston facilities ceasing supply to trade while it explored the source of the outbreak and did a deep cleaning process.

Tiger Brands and RCL Foods share prices tumbled on the JSE, and Alec Abraham, a senior equity analyst at Johannesburg-based Sasfin, said that the weakening of the share prices  would likely be sustained.

More than six countries imposed trade bans on products from South Africa, resulting in losses of over R100m in sausage exports alone.

The outbreak has caused around R1 billion in losses to the pork value chain so far due to the changes in consumer perceptions of pork. Half of the pork industries meat is used in processed products, according to the South African Pork Producers’ Organisation.

Tiger Brands’ CEO Lawrence MacDougall said, “We are making every effort to ascertain how ST6 arrived in our production facility in Polokwane, despite us adhering to all the prevailing industry standards.The Listeriosis outbreak has been a terrible blight on the entire ready-to-eat meat industry. It is imperative for the entire industry to come together to agree on an appropriate standard with government. It is not a problem which is unique to South Africa or for that matter Enterprise Foods.”

The Democratic Alliance (DA) blamed Health Minister Aaron Motsoaledi for a ‘lack of political will and clarity’ for not getting to the bottom of the Listeriosis outbreak sooner, and that the outbreak pointed to, ‘a broader neglect of proper food safety mechanisms on the part of government.’

DA member of parliament Evelyn Wilson said the record of the world’s largest listeriosis outbreak was ‘not one to be proud of’ and blamed it on a shortage of environmental health inspectors, saying the outbreak could have been avoided if factories were inspected every three months.

In the midst of the crisis and finger-pointing, the Department of Health announced that it would help victims of the Listeria outbreak seek legal restitution, and a class action has been filed by human rights attorney Richard Spoor and Bill Marler of U.S. food safety law firm Marler Clark.

Marler has represented thousands of people in claims against food companies and has harsh words for food and beverage producers.

“If you cannot make mass produced produce safely – don’t sell it. If you put a defective product into commerce and you harm someone, you are responsible. To suggest otherwise, is legally and morally wrong.” – Bill Marler

Estimates are that the listeria outbreak could end up costing Tiger Brand’s in excess of R800m.

In short, yes. If food and beverage producers pay attention to the big picture and improve food safety through the entire supply chain, food will become safer.

ISO standards and preventative controls encourage food companies to adopt comprehensive monitoring during every step of the food production process.

Food safety and quality management systems provide the framework for record-keeping, training hazard analysis (food safety), prerequisite programs, and so on, which are required in the mandatory preventive controls rules.

ISO 22000 is a certifiable standard and sets out the requirements of a Food Safety management system. Everyone in the food supply chain from farmers and manufacturers to retailers and consumers, can benefit from the guidelines and best practice contained in these ISO standards, which cover everything from food harvesting to product packaging.

Issues relevant to consumers such as food safety, nutritional labelling, hygiene, and food additives are also addressed by these standards, which give consumers the peace of mind in knowing that the food they eat meets high standards for safety and quality and contains what it says on the label.

What should food and beverage producers do?

In view of the massive financial losses and reputational damage facing food giant Tiger Brands and the RTE value chain, can any food producer, retailer or anyone involved in the food chain afford not to implement food safety standards or at the very least re-examine Food Safety Management Systems across their entire operation?

Risk ZA offers training courses and consulting services in Food Safety, Quality Management and Risk Assessments for companies that wish to implement or improve on their Food Safety Management practices.

Search for anything you want to know…