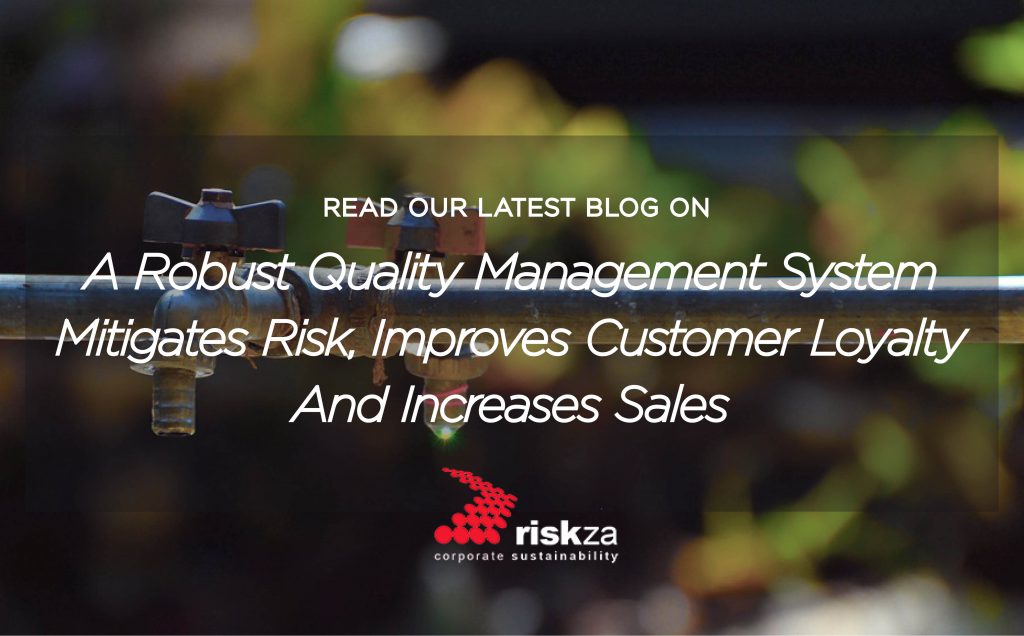 The drought in the Western Cape is today’s reality. Sub-Saharan Africa as a region sees too little rainfall, or too much, in the wrong place or at the wrong time and too many demands are placed on this scarce resource.

Water knows no boundaries and the effects of pollution upstream or from neighbouring countries are experienced by others downstream. Sustainability of water as a resource has been and is affected by poor management complicated by skills shortages and insufficient investment in training and human capital. Prioritising planning and human capital is as necessary as infrastructure provision and maintenance or adopting alternative water-efficient technology, such as low-flush and pour-flush toilets.

The 2016 / 2017 agricultural season was the driest on record since 1904, and the consequences will be felt for decades to come. The creep of climate change is suddenly upon us and we can now expect drier seasons and more intensive storms and unpredictable weather patterns.

Agriculture has lost billions of rands and thousands of jobs and we are reminded of Thomas Fuller’s words – “We never know the worth of water ‘til the well runs dry.”

Day Zero for Cape Town may have been scrapped but water experts warn this does not mean the taps won’t run dry. It is still as likely to happen as it was a week ago. When they do it will be a national disaster, the magnitude of which has not been faced in any of the world’s major cities since World War Two and 9/11.  The western Cape’s economy undoubtedly will be severely affected. Tourism and agriculture are two water-intensive sectors that support it and many lives depend on income derived from these sectors. The knock-on will be felt by fruit and vegetable processors, juicers and canners that rely on these fresh fruit producers.

Mike Peo, head of Infrastructure, Energy and Telecommunications at Nedbank Corporate and Investment Banking, blamed political apathy for the mismanagement of the crisis and predicted a decline in the province’s key tourism industry. Peo also said that climate change was having a real impact and that the crisis was exacerbated by massive water losses due to inadequate maintenance of ageing infrastructure, and poor management of water distribution networks.

The purpose of the meeting was to discuss and better understand the scope of the drought and how, given the intensification of extreme weather (climate change), cities can accelerate their preparations for an uncertain water future.

Dr Winter said there had been an underlying widely held perception that the onset of climate change would be slow, less erratic and that it would allow more time to prepare for drought. “In reality, the impact of what we are now experiencing has been rapid, unpredictable and more far-reaching than expected. This coincides with a city that is facing numerous other developmental challenges including access to land, housing, education, health and sanitation services.” (Engineering News, 9 March 2018).

The extent of South Africa’s water crisis is much bigger than the western Cape’s.

In response to the drought the Nelson Mandela Bay municipality in the Eastern Cape has increased water restrictions and tariffs after dam levels dropped below the “critically low” point of 40%. Level 1 restrictions remain in place in Johannesburg, Durban and other metropolitan areas.

The water crisis has been a long time in coming.

The National Water Act invests National Government with the responsibility and authority for the country’s water resources, its management and the protection of water quality to ensure sustainability of supply. Municipalities are tasked with cleaning and providing water to consumers and processing waste-water at sewerage treatment plants.

Cracks started showing in the system back in 2008 when The Green Drop Report – which monitored the quality of treated waste-water discharged to rivers – revealed that only 45 percent of municipal waste-water treatment plants that were assessed scored above 50%.

The 2014 Green Drop Report concluded that nearly a quarter of the country’s waste-water treatment plants were in a “critical state”, with a further quarter listed as “high risk”. Eleven babies died in 2014 in Bloemhof from diarrhoea caused by drinking contaminated water.  The town’s sewage plant had been dysfunctional for years and was pumping raw sewage, used condoms, plastic and other pollutants into the Vaal River.

Since the demise of government’s Green Drop Report, the non-govermental organisation AfriForum has stepped in to do similar water quality tests. Its most recent finding is that two-thirds of tested waste-water facilities do not meet national water quality standards, an increase of more than 100% from its 2016 report.

Our rivers have tragically become the receivers of human waste and other pollutants and now carry high pathogenic loads.

Water from contaminated rivers is drawn to irrigate agricultural crops and fresh fruits and vegetables are often eaten raw or lightly-processed for canned produce. These pathogens pose a serious health risk to consumers.

The uMngeni, Vaal, Crocodile and Olifants rivers have the ignominious reputation of being the country’s most polluted rivers.

A study commissioned by the Water Research Commission (WRC) in 2013 found proof of cholera, shigella, salmonella and other harmful viruses and bacteria at every sampling point between the Inanda Dam and Blue Lagoon in Durban.

All sampling points along the uMngeni River failed to meet water quality targets for drinking water and recreational purposes. The University of KwaZulu-Natal researchers Johnson Lin, Atheesha Ganesh and Moganavelli Singh warned in the report submitted to the WRC that this contamination could have serious health implications.

The current listeriosis outbreak from eating contaminated processed meats amplifies the harm that gross negligence and ignorance of quality and safety standards and legislation can have on human health, businesses’ profits and trade.  A law firm announced on Saturday 10 March 2018 that it would be filing a class action against Tiger Brands after an Enterprise polony factory in Polokwane was found to be the source of the deadly outbreak. Richard Spoor Incorporated Attorneys will join a United States food safety law firm Marler Clark to file the suit.

The outbreak has also placed a cost burden, ultimately borne by the country’s shrinking taxpayer base, on an already overstretched public healthcare service as many people affected by the outbreak cannot afford private health insurance.

Tony Carne a then environmental journalist at Durban’s Mercury newspaper reported in 2013 after a release of a WRC report that half (50%) of the country’s water was being stolen, wasted or leaking away (non-revenue water loss).

The WRC estimated at that time that our non-revenue water loss amounted to around R7 billion.

The water quality of many rural groundwater systems does not meet national water quality standards, which means that much of the ground water is not available for human or animal drinking purposes.

As water consumers we use 235 litres a day compared to the world average of 170 litres per day, a good indication that most people do not understand that water is a scarce resource.

Water demand over the next 20 years is projected to rise and already the country’s water resources are almost fully extended.

Water is a vital cog in every economy. The way we manage our water resources needs radical re-thinking. One of the most important pressing issues that we all need to think about is using low-water sanitation in our homes and businesses.

ISO standards cover almost every water issue and offer a business-wide approach through which departments and personnel can be aligned and committed to managing risk and reducing water consumption and environmental impact.